How To Become NEO Consensus Node

NEO, with a total of 100 million tokens, represents the right to manage the network. Management rights include voting for bookkeeping, NEO network parameter changes, and so on. The minimum unit of NEO is 1 and tokens cannot be subdivided.

GAS is the fuel token for the realization of NEO network resource control, with a maximum total limit of 100 million. The NEO network charges for the operation and storage of tokens and smart contracts, thereby creating economic incentives for bookkeepers and preventing the abuse of resources. The minimum unit of GAS is 0.00000001.

The second portion is 50 million NEO managed by the NEO Council to support NEO’s long-term development, operation and maintenance and ecosystem. The NEO in this portion has a lockout period of 1 year and is unlocked only after October 16, 2017. This portion will not enter the exchanges and is only for long-term support of NEO projects. The plans for it are as below:

🔹 15 million tokens (15% total) will be used to cross-invest in other block-chain projects, which are owned by the NEO Council and are used only for NEO projects

Below is an estimated* timeline of how NEO is to be unlocked.

NEO is committed to building a decentralized network. But it is worth noting that due to the unlocking plan, NEO Foundation will have access to a considerable number of votes in the next few years. As a result, the governance of NEO’s network currently consists of two methods: chain governance and off-chain governance.

Chain governance relies on the mechanisms of the NEO blockchain itself. It is what NEO hopes to be the main source of governance in the future.

NEO token holders are the network owners and managers, managing the network through voting in the network, using the GAS generated from NEO to utilize the functions in the network. NEO tokens can be transferred.

Off-chain governance relies on the continued support from NEO Foundation.

The maintainer of NEO consensus node will be rewarded with network fees, which is the GAS that the network charges users whenever they use the resources of the network.

NEO 3.0 will have more detailed discussions on the incentive models of the network. So this section will see continuous updates in the future.

As NEO currently has two components to its governance, (as detailed in the Governance Models section) there are two ways of becoming a consensus node.

If you wish to become a consensus node through the votes of NEO holders and maintain it independently, the steps are as follows:

All potential candidates are advised to provide some, or all of the information listed below. These information can be published on the Consensus Node Page and the organization’s official website.

Off-chain governance candidates can apply by sending organization information and maintenance proposals to:

The proposal should contain information listed in 1. Requirements.

Application results will be sent to the applicants through email. If the application were to be unsuccessful, a new proposal can be sent after reviewing and improving specifications and solutions.

To become a consensus node on Test-net, you need to first register as candidate on the blockchain.

The GUI operations of becoming a candidate and voting (Sections 3 and 4) are the same on both Test-net and Main-net. The difference is determined by which chain the GUI is synced to. To switch between test-net and main-net on GUI, see this document.

You can use the NEO GUI to register as a candidate. Candidates will be voted by NEO token holders to determine how many nodes and which nodes will become the consensus node.

Once the node has become a candidate, NEO Foundation will vote for the node so that it becomes a consensus node on test-net.

If problem arises with the consensus node during this period, active communication and troubleshooting is expected. NGD will provide technical support if these situations arise.

After 6 months of running the test-net, the applicant will be qualified to become a candidate for a consensus node on the main-net.

Starting from 30th Nov, 2018, NEO Foundation complete a selection cycle for applicants every 3 months. NEO Foundation will try to select one candidate according to candidate’s potential contribution to the NEO ecosystem. Candidates who have applied but have not been chosen as consensus nodes will automatically enter the candidate pool for the next 3-month cycle.

When all 7 current consensus nodes have been decentralized, NEO Foundation will decide in the following election cycle whether or not there will be more consensus nodes beyond that.

Below is the selection schedule in 2019:

Make sure your NEO GUI is connected to the main-net; Then register as a candidate by repeating the steps in 3.2.1

Once successfully becoming a candidate on the blockchain, off-chain governance candidates will receive votes from NEO Foundation.

For chain governance candidates, gaining community understanding and support will increase the likelihood that NEO holders will vote. These are some of the advised actions:

The following sections goes into more detail on the voting mechanism and how any NEO node can vote using the NEO GUI.

*: NEO3.0 will make adjustments to the voting mechanism. This section will be updated accordingly when 3.0 launches.

After voting, the NEO network calculates in real time* based on the number of candidates cast by each account and determines the consensus nodes. The calculation method is:

*: which means that this calculation is made each time a block is produced

Applicable to all candidates and all NEO holders

Anyone holding NEO can vote using the GUI. Candidates are allowed to vote for their own nodes.

NEO is a network that will continuously be updated. The current version of the NEO network is determined by the version of the consensus nodes(currently using neo-cli).

When maintaining a consensus node, there will be updates to the NEO node (neo-cli) which the maintainers will need to carry out. Below is a procedure to each NEO node update:

To check the number of votes on each candidate that has registered, you can use Postman or any other RPC program to access the API. (For instructions on how to, see this document)

As shown below, send a getvalidators request to the API. 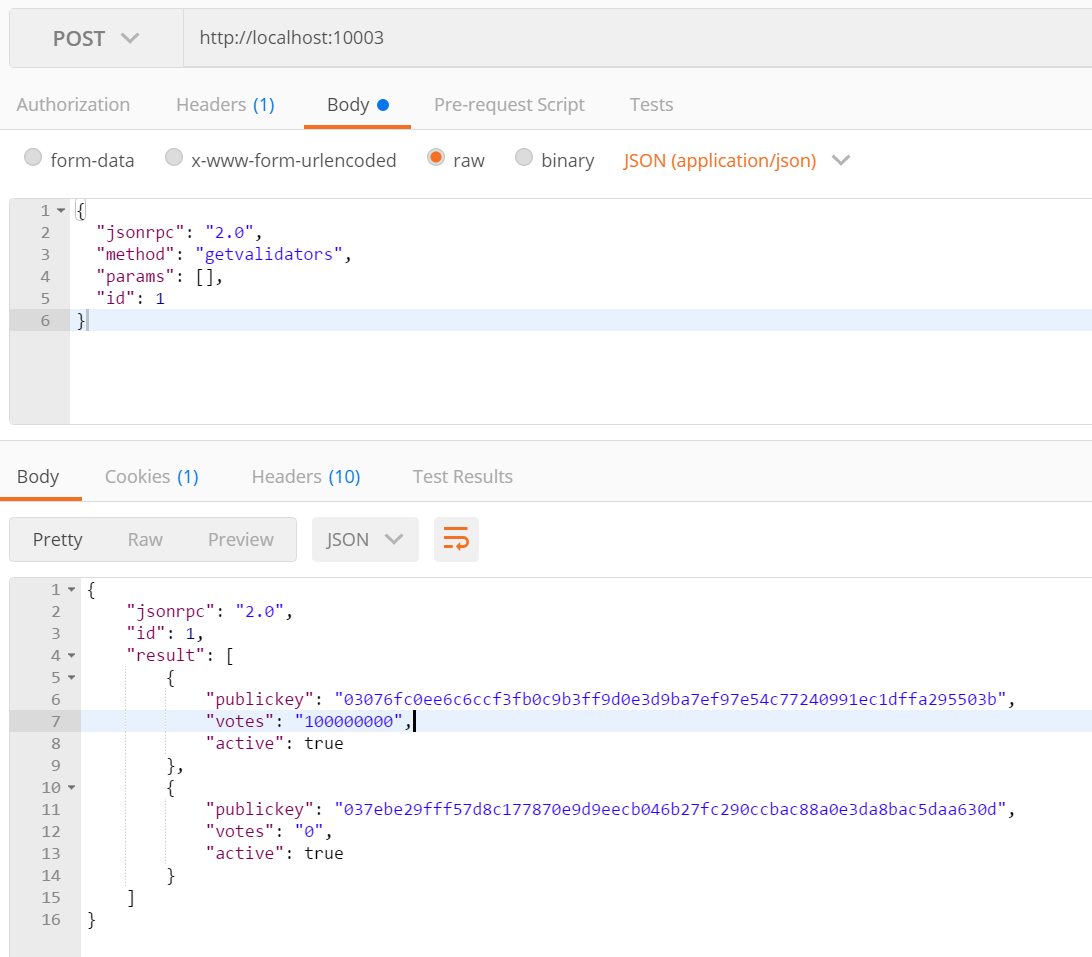 The node returns a json file containing public keys of candidates and the votes each one received.

The active field in the returning json file indicates the status of the node.

false means the node is a candidate node.

true means the node is a consensus node.

The Consensus Nodes page can be used to track the status and number of votes for each candidate on the main-net. 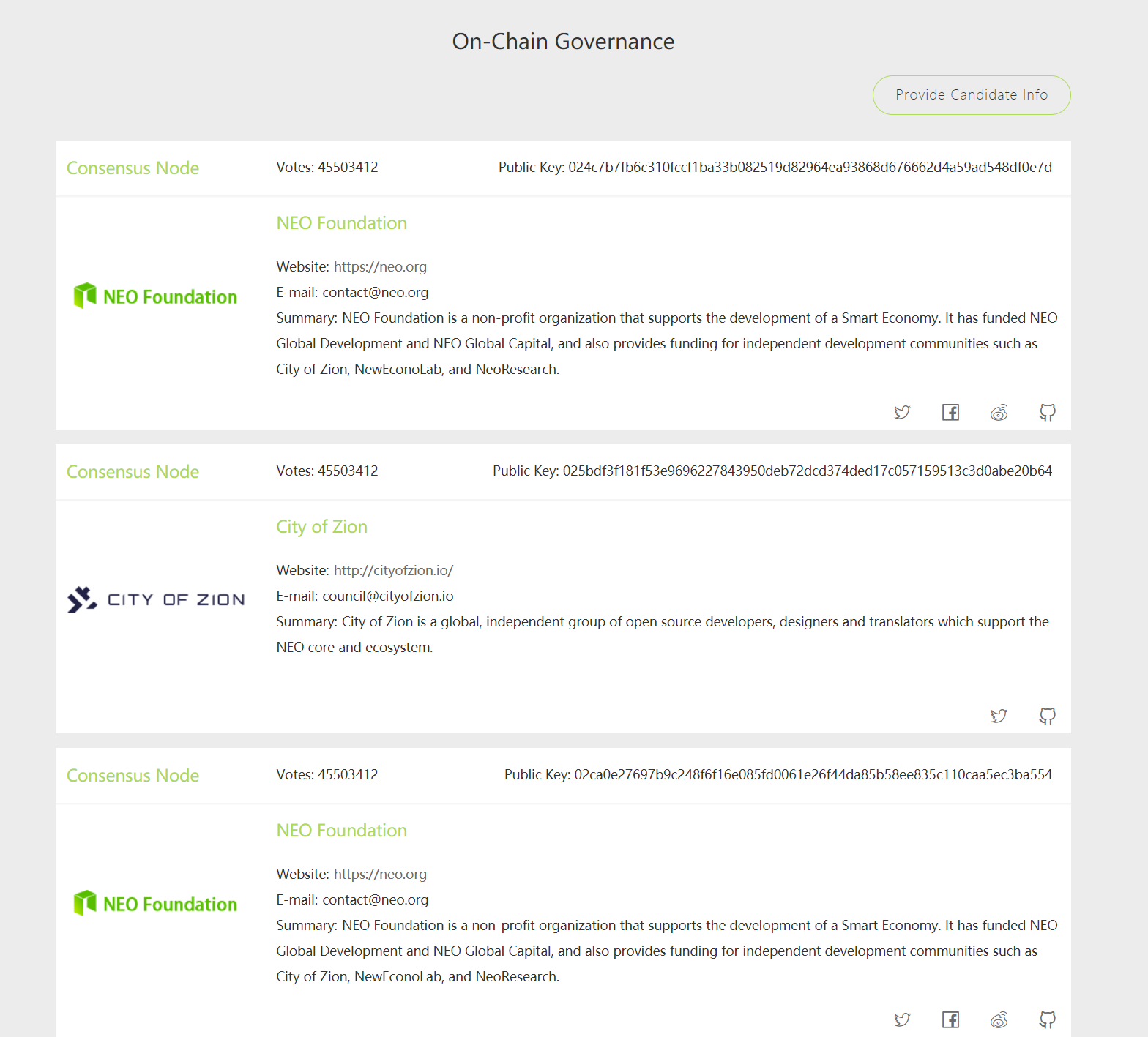